As people of faith, our growth and successes are often subtle and hard to see. We don’t graduate from schools as students do, or get promoted as employees do, or post record-breaking profits as corporations do.

But right now, we in EcoFaith do have a success to celebrate, or actually, several.

Portland Clean Energy Fund (PCEF) is virtually certain to make the November ballot, having gathered more than 50,000 signatures  (combined paid and volunteer). Social justice and climate stewardship, which are foundational to our progressive faith, are wedded in this ballot initiative. 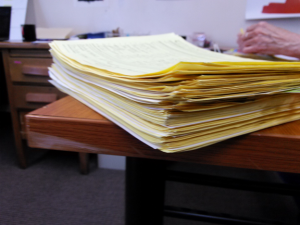 EcoFaith has surpassed our goal of gathering 2,000 signatures (see photo below) for the Portland Clean Energy Fund (PCEF). We are among the top signature contributors of the non-profit groups, despite being among the smallest of those groups.

We acted not just with each other in EcoFaith, but in partnership with many groups that share our values, such as NAACP, Verde, 350PDX, Sierra Club, Coalition of Communities of Color, Climate Jobs and more. As a colleague from one of those groups said,

“The relationships we are forming, and who we end up becoming to each other, mean that we win, regardless of whether voters pass PCEF in November”.

(in no particular order; please tell me if I’ve missed anyone):

*Asterisks indicate folks who’ve also worked in the Validation office, the PCEF office, or as a courier, for an EcoFaith total of several hundred hours of service above and beyond the gathering of signatures. This is strong faith-in-action, the best kind of success.

Part 2 of getting PCEF passed still lies ahead of us in the months before Election Day on November 6. The summer/fall campaign will involve voter education, gathering pledges to vote for PCEF, house parties/fundraising, and for EcoFaith, outreach to faith communities. More to follow. Many of us are doing some Renewal (Practice 7) before resuming campaign-work.

Success in Reaching our Goals! Thanks to Those Who’ve Contributed!