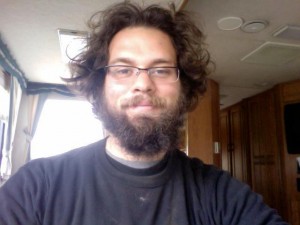 Hey there, Matt here. I’m starting my internship for EcoFaith Recovery this summer finally! Kairos apropos. My idea is to explore the intersection of environmental justice, permaculture, theology, and social justice. First be sure to mark your calendar for Eloheh Day on June 14. I will be giving a talk with a Kalapuya woman about settler-native history of the land we call Oregon, Randy and Edith Woodley will be discussing their vision for Eloheh Farm, we’ll be giving a tour of the farm and talking about future projects, Bill Joliff will play us a few diddies, possibly Seth Martin too, oh yeah, and we’ll have a pig roast! It should be a great day, I’ll be posting a flyer soon.

I grew up in Indiana, my grandpa had a 300 acre farm that I always wanted to farm (full disclosure: I also had visions of designing a golf course on the land too.) My great grandpa grew all the food for the family on that same land, they only occassionaly bought flour from the store. However the land was auctioned off after my grandpa’s death and has since been Monsantized. I went to Purdue University in the pre-vet program, then switched to turfgrass science, until finally transferring to Cincinnati Christian University after I met Jesus on a mountain in Jamaica. I studied Urban/Intercultural Ministry at CCU and became aware that I am White when I first moved to Cincinnati. I had no money, but I found a place to live in the Over-The-Rhine district above a 24-hour barber shop on the cheap. The summer after I moved in I was reading a book about culture shock ostensibly for overseas business people and missionaries, but I noticed I was experiencing all of these feelings in the very community I was living in more than I ever had abroad. After that I started being more open to people in the community, luckily the barber below me, Tone, was a gregarious dude and helped me adapt to his culture. I was the first White person’s hair he ever cut, and I have to say my facial hair has never looked better than the two years I spent in OTR in Cincinnati. Tone always had me lined up looking fresh, a different state of affairs than my current facial hair!

I also experienced transnationalism and the affects of neoliberal policy and our globalizing economy during my internship in Italy. I was in Milan working with a church that was predominantly Filipino. The pastor however was a white American dude, a really nice fellow, but the situation maintained the paternal relationship between American and Filipinos fostered by the US colonization of the Philippines following the purchase of the Philippines from Spain, the US-Philippine War, and the subsequent colonization/indoctrination of the Filipino people. I learned a lot about people leaving their homeland for financial gain and the burden of living in a dominant culture that thinks of you as inferior because of the color of your skin, transnationalism, and cultural hybridity during that time.

My dad died from what essentially boils down to a life of overeating while I was going to CCU. He actually died of surgery complications, but we won’t get into the US healthcare system here. I reflected on my father’s addiction to food and our agriculture system in America after his death. After watching Food Inc. I began exploring more deeply the system predicated on treating both the land and people as resources to be maximized and began understanding how our food system is set up to maximize consumption for profit. This is a discussion I’m sure most EFR blog readers are familiar.

After graduating CCU I decided I would not become a missionary. I badly wanted to travel the world and get to know a different culture in a deep meaningful way, but I couldn’t justify doing this in what I believe to be the destructive way most missions and NPOs operate, referred to often as the non-profit Industrial complex. I had planned upon graduation to try to become full-time missionary for my homechurch in their Liberia mission. The mission was predicated on providing clean water to Liberian peoples. I noticed one of our golf outings were sponsored by Firestone and began questioning this alliance. Liberia is home of the world’s largest rubber plantations, and of course these plantations and factories are dumping vast amounts of toxic chemicals into Liberian watersheds, not to mention child labor and a host of other damnable crimes the occur in oppressive workplaces. Nothing was being done to empower the Liberians to fight the corporations and the powers oppressing them and making their water dirty, why? Firestone funded some of the events and shipped crates over for free for the church. By extending a little bit of help to the church’s mission Firestone gained a powerful alliance and a way to silence the Liberian people’s voice against oppression through the gospel. It’s a much more efficient system for corporations like Firestone to give a few thousand dollars to a mission and gain a lot of visibility, a mutually beneficial relationship that increases visibility for both mission agency and corporation on the backs and livers of Liberians further propagating the paternalistic model imperialism is predicated on. No, I couldn’t sign up for that.

I began reading and learning about permaculture toward the end of my time at CCU thanks to one of my few good friends at the school. Permaculture is essentially indigenous agricultural/horticultural techniques adjusted to a colonized world. Many will point to Bill Mollison as founder, father, or god of permaculture. He’s a brilliant dude to be sure, but he got his ideas from his experiences with indigenous folks, so I like to locate the conversation there when I talk about permaculture instead of thinking it is a western invention. I believe more-and-more if we are going to survive the next century it will be by letting indigenous people whose land Settlers are on lead us back to some semblance of harmony. The land be-longs to its indigenous people, I mean that it longs to be with those people. I believe all social justice groups should align their efforts with the host people whose land their on and advocate for the dismantling of empire and restoring Native people to their original land. This aspect deserves a longer discussion and may warrant another blog post. Would you like to read more about this? Permaculture is a way of rethinking our future, of creating a regenerative society. The distinction between sustainable and regenerative is important. God did not create a sustainable world, God created an abundant world, a world able to give life in a way that gives back more than it takes. Would you like to live in a static world or a world of open-ended possibilities and re-creation? I’ll take the latter!

I am excited my friends David Prichett and Elizabeth Schallert recently moved to Oregon from Indiana. I didn’t know them before they moved, but they have similar interests in permaculture, Christianity, and liberation. Yey! They’re giving a table talk May 22 about permaculture and the crazy world we live in, I strongly encourage you to be a part of that! One of the great lessons permaculture has taught me about spirituality is biodiversity (see: postcolonial theology.) Monocultures are bad for ecosystems, maintaining monocultures depletes soil, quenches acquirers, and spawns superweeds/diseases. These all have spiritual parallels to me, when we only see Christianity through the Euro-centric (predominantly male) lens we become the GMO cornfields of Indiana I grew up around. The Spirit represents the watersheds/aquifers in this metaphor, the soil representing our churches (our ability to store nutrients), as the midwest experiences massive soil erosion churches are also fading away, this erosion to me representing the doctrine of selfishness propagated by Empire/capitalism that makes us individualistic instead of communally/ecclesiastically-minded. Ecclesia was originally the sort of local political group of the community which did not have the secular/sacred divide we pretend exists today. I would also argue that there really is no divide between he sacred and the secular at all, what we or worshipping, praising, and sacrificing for in the “secular” world is what we are doing spiritually.  Buying products of Empire is sacrificing to the Empire. The secular/sacred divide is a false dualism needed to lull the church to dormancy. Other permaculture thoughts include spiritual mapping through plant guilds and mycelium pneumatology. There’s so much to discover and re-create, it’s very exciting!

I decided I wanted to try to “fix” the church after I graduate with my biblical studied and intercultural ministry degree. Thanks to my disposition toward the outdoors and my newfound interest in permaculture I serendipitously ran across the Christian Earthkeeping concentration within the M.Div. program at George Fox Seminary. I applied and began looking for a farm in Oregon to live and work on while I was at seminary. I was accepted to the program and find a place to live in Beavercreek, OR called Boondockers Farm. One of the best parts of my undergrad career was reading and learning from contextual theologies of other cultures. Learning about non-western theologies, referred to as “contextual theology” as if they were somehow a departure from the “real” theology or Western theology, were inspirational to me. I really wasn’t interested in euro-centric theology, but I thought I could find a good balance with the Christian Earthkeeping program, unlocking that theological imagination would carry me through the monocultural fields of theology, so I thought. I may have been able to, but luckily I met Randy and Edith Woodley and after getting to know them they asked if I wanted to live on their farm and help. I decided it was time to move on from Boondockers Farm and have been living happily at Eloheh Farm in Newberg, OR since last March.

I also switched to the Master of Intercultural Studies program at George Fox Seminary which is taught by North American Institute for Indigenous Theological Studies. The program is a deep study on the contextual missiology and theology of Indigenous people on Turtle Island. If you know anything about indigenous cultures you know that theology and ethic of the land is the backbone of their worldview. I never thought I’d have anything to do with “intercultural studies” or missiology again, but what better way to learn than to learn from the people who have been devastated by Christianity and settler-colonialism, their critique, and their ideas about ways forward. I was in heaven! Eloheh is the Cherokee word for “harmony” or “shalom.” So intellectually, spiritually, and physically (is there a distinction between these?) I really do feel like I’m in heaven. There’s a lot of shalom to be made, there’s a lot of community to restore, land to heal, justice to bring, empire to dismantle, etc. etc. and I hope to share a little bit of myself and learn from you all over the summer as I probe more deeply into these intersections. Don’t forget to mark your calendar for June 14! A’ho!

Read more about Matt and other EcoFaith Recovery Interns here.