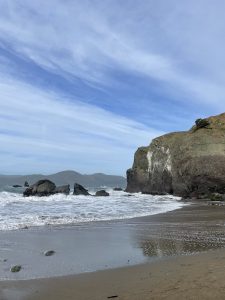 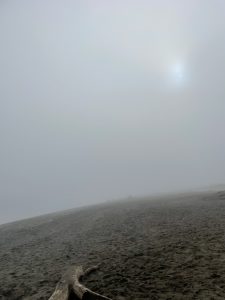 The Pacific Ocean just before it reaches the bay of San Francisco at Mile Rock Beach and the Columbia River at Sauvie Island outside of Portland. These bodies of water have been integral in my life and spirituality.

One of the ways I’ve been able to engage in Randy Woodley’s work and Becoming Rooted has been through his Facebook lives. The first was on January 12, which celebrated the launch of Becoming Rooted: One Hundred Days of Reconnecting with Sacred Earth. This launch day was picked as it is 100 days from Earth Day. A second was held on January 26th with Brandi Miller to continue discussions from the book and usher us into the next section of the book. The third was held on February 16th with Jim Sequeira. Throughout the 100 days journey, keep an eye out for these lives, as they are an exciting and unique way to engage with the book, with a community of folks reading it, and with Randy himself.

As I’ve been involved with Eloheh, I’ve been able to learn a bit more about the background and context of Randy’s writing. Now I’m excited that people who participate in the Facebook live events are able to gain some of this context from him directly as well. Learning about the concept of tapping into one’s indigeneity has been so interesting to me, and is something I am grounding this journey in. I sought out this opportunity with EcoFaith and Eloheh not only to contribute to dialogue around environmental justice, but to engage in conversation around spirituality as well.

My environment has always been fundamental to my spirituality. Growing up in San Francisco, I felt so tied to the bodies of water–the Pacific and the Bay– and water has always held significant meaning for me. The greenery and trees of Golden Gate Park held lots of meaning for me also. As I got older, I learned a lot more about the environment in the city. Golden Gate Park sat on a part of the city that had previously been sand dunes. This park was built, engineered. Many of the trees that I had grown up with a fondness for were Eucalyptus trees. Their aroma and distinct leaves bring back so many memories for me of playing in the park as a child. Again, these trees are not indigenous to San Francisco, and took over the landscape when they were introduced. It felt odd to learn that these things I associated so closely with San Francisco weren’t indigenous to it. It also brought up questions for me about how to be in relationship with the environment when non-native species have taken over, or environments have been engineered and designed.

The conversations I’ve been engaging in about Becoming Rooted, whether they be watching the Facebook lives or discussions with my mom and other EcoFaith members, have really helped me continue on this journey of interrogating my beliefs. Even those who are dedicated to ‘doing the work’ will catch ourselves getting comfortable with our beliefs and biases, along with their origins. The concept of how we relate to the earth and its inhabitants is not a new one to me, but during the first FB live, listening to Lenore Three Stars talk about the concept from the Lakota perspective was refreshing and served as a great reminder to me of this idea. I also hadn’t thought about the fact that we are connected, whether we acknowledge it or not, whether we like it or not,“…but do we want to enjoy that relationship? Do we want to be reciprocal about it?” Lenore offers these questions for us to think about.

I’m so excited to engage in this 100 day journey with Randy’s writing, along with the reflections from so many. I’m excited to deepen my relationship with the land and environment around me, to continue interrogating my beliefs, and to listen to and uplift Indigenous voices.

Meg Bender-Stephanski (she/they) and is a recent graduate from the University of Portland, where she received a B.A. in Environmental Ethics and Policy, with minors in Social Justice and Theology. Learn more about Meg here.

Reflections on Indigeneity: From the 100 Days Journey