Editor’s note: Deb Schulz is a leader from Bethlehem Lutheran Church, which is located in Portland Oregon.

Last weekend I attended a retreat hosted by St. Andrew Lutheran Church and EcoFaith Recovery. It was the third of a series entitled “Returning to the Rhythms of God: Waters of Justice. Pastor Terry Moe was the main speaker. He shared this story: “Once upon a time, there was a town that was built just beyond the bend of a large river. One day some of the children from the town were playing beside the river when they noticed three bodies floating in the water. They ran for help and the townsfolk quickly pulled the bodies out of the river. One body was dead so they buried it. One was alive, but quite ill, so they put that person into the hospital. The third turned out to be a healthy child, who then they placed with a family who cared for it and who took it to school. From that day on, every day a number of bodies came floating down the river and, every day, the good people of the town would pull them out and tend to them taking the sick to hospitals, placing the children with families, and burying those who were dead. This went on for years; each day brought its quota of bodies, and the townsfolk not only came to expect a number of bodies each day but also worked at developing more elaborate systems for picking them out of the river and tending to them. Some of the townsfolk became quite generous in tending to these bodies and a few extraordinary ones even gave up their jobs so that they could tend to this concern full-time. And the town itself felt a certain healthy pride in its generosity. However, during all these years and despite all that generosity and effort, nobody thought to go up the river, beyond the bend that hid from their sight what was above them, and find out why, daily, those bodies came floating down the river.”

There is a difference between charity and justice. Churches have gotten the charity piece down. Clothes closets, food pantries, meals and showers for the homeless. The justice piece…we’re just getting into tackling that one. Justice requires more of us. It requires us to be in relationship with people that we have been previously providing services for.

Early in our gathering we had some very interesting Bible work. We looked up the word justice in the concordance. It is used in two ways. Sometimes it speaks of law enforcement. Sometimes it is used in a relational way. I was sitting at a great table for this practice. One woman pictured it like this: “Justice is twofold. It’s like a mouth with teeth. There is power to bite into something. But the mouth of teeth is useless if they are not attached to a live body.”

Then she got into finding the root word for justice and found that righteousness and justice share the same root! It is as if they are
two sides of the same coin. And when that coin is spent (used/worked) the outcome is peace. This can be heard in Isaiah 32:16 & 17. “Then justice will dwell in the wilderness, and the righteousness abide in the fruitful field. And the effect of righteousness will be peace, and the result of righteousness, quietness and trust forever. 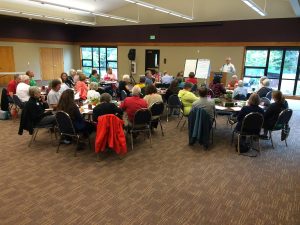 If we look closely, we see that Jesus gave us wonderful examples of how he responded to people’s needs. He acted as a servant and a healer on many occasions. Other times he advocated for them. And then there were times when he told them “Go. Do ______.” Once he removed an obstacle, he had them do for themselves.

It’s easy to buy extra food and donate it. Or to give away our extra clothing. And there is a need for that. There are also times when
we need to stand up for people who cannot stand up for themselves.

Where we want to end up is, side by side with people we might not usually associate with. At the same table. Sharing the same meal. Sounds a lot like Communion, doesn’t it?