Recently in my life I have had the opportunity to be a part of the planning team for a few major projects. One of these was the EcoFaith Youth Camp (each summer the EcoFaith Youth camp offers interactive events for High School Youth focusing on environmental justice issues). Going into it although I had several discussions with Nathan Holst (former intern and Intern Coordinator for EcoFaith Recovery) about what the project was about I still wasn’t entirely sure what it would be like and what exactly my role was.

Planning this camp ended up being a lot more fun than I had expected. We had a team of people who worked well together and complemented each other well. We didn’t have to start from scratch in the planning and that was really nice. I thought that it was helpful that we had Nathan, who’d run the camp the previous year, and Jonathan, who’d been a part of the camp the previous year, to reflect on what they thought had worked well and what needed to be changed. I was able to offer a fresh perspective, having never seen most of the material before, and I think that helped to clarify some parts. One of the most useful things I brought to the planning team was confusion. Having not experienced the camp before I was able to pick up on some things that were seemingly thrown in without sufficient introduction. Because we knew that several of the participants had been a part of it the previous year as well it was also really good to have one of them on the team so that we were better able to decide what was okay to repeat and what needed refreshing. All in all, the different experiences with the camp on our planning team had made for a successful planning experience. 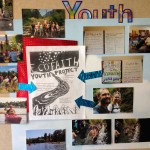 The first day of the camp was great. Although I had all of the material in front of me and had practiced the parts I was going to be leading I was still a little nervous and unsure of how it was going to go. Most of the people in the camp knew each other from church or the camp last year. I only knew the other members of the planning team so that was a little nerve wracking for me. I didn’t know how the kids in the camp would react to everything and how willing they would be to participate. Turns out that most of my fears were unfounded. The kids listened intently and came with a willingness to explore deeply and share their feelings. I was very pleased with the first discussion I facilitated. When you’re facilitating a discussion, there’s often a general plan of what major points you want the group to hit upon. I don’t know a much better feeling than the one when someone in the group shares a thought that works as a perfect transition for the next area you want to focus on in the discussion. There was a moment like that for me in this and I was very happy about it. The first day was a lot about our relationship to nature and our role in it, how we are a part of it. After watching some videos, some which were a bit overwhelming and were based in fear, we went on a hike where we got to experience nature and the awesome power it holds.

Through the planning and the first day of the camp I felt like I gained more direction on what my purpose was as related to EcoFaith and the extended community. I still don’t feel like I’ve answered that question, but each thing I do brings me closer to finding out what I get out of it and what it is I can bring.