Pre-gathering, 2:00pm meet at St. James Lutheran Church: 1315 SW Park Ave, Portland(on the SW corner of Jefferson) The Wilderness Way Community, on behalf of the entire EcoFaith Recovery network, will be singing, drumming and teaching songs to prepare and inspire us for the march.  This will be the place for congregations to gather so we can participate in this action together!

Immediately following the March meet at St. James: 1315 SW Park Ave, Portland(on the SW corner of Jefferson). Directions and details here. We will gather to join in our collective practice of reflection and evaluation of the event!

Click here for everything you need to know regarding “Details for the Day!” 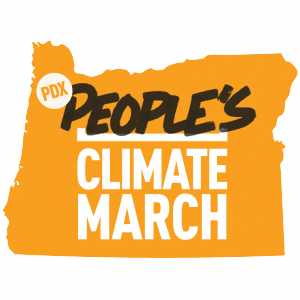 What is the People’s Climate March?

On September 21st, in New York City, there will be an unprecedented climate mobilization in size, beauty, and impact. As heads of state convene in New York City for a historic UN summit on climate change, with our future on the line, we will take a weekend and use it to bend the course of history.Our demand is a world we know is within our reach: a world with an economy that works for people and the planet. In short, a world safe from the ravages of climate change.

This moment will not be just about New York or the United States. Heads of state from around the world will be there, as will the attention of global media. We want this moment to be about us the people who are standing up in our communities, to organize, to build power, and to shift power to a just, safe, peaceful world. To do that, we need to act together.

What is the People’s Climate March in Portland?

A march and rally of thousands of Oregonians in solidarity with the main rally that will take place in New York City that same day.

How can my congregation get involved?

EcoFaith Recovery invites you to organize a group from your congregation to participate in the People’s Climate March in Portland (PCM in PDX) on Sunday, September 21st, 3:00 p.m. Pre- and Post- gatherings will be announced later so all who desire can participate in singing and spiritual grounding before the march and debrief our participation afterwards. Please save the date, and start publicizing, organizing, and mobilizing your congregational team! As details become available, you will find them on this webpage.

TIMELINE: Ways to get involved

Supporting New York and the Movement: If you were considering going to New York and have decided to participate in Portland instead, the Beyond Fossil Fuels Organizing Team of EcoFaith Recovery invites you to consider taking action in the following ways:

1) If you know ANYONE on the east coast, do whatever you can to get THEM to go to the march in New York City. This movement requires not just thousands, but hundreds of thousands of people in New York City to really make a difference!

2) The Beyond Fossil Fuels Organizing Team encourage us all to consider donating  the cost of your trip to EcoFaith Recovery (or any of the many organizations working in this area) to build the faith-based movement for a more sustainable way of life here in the Pacific Northwest.

Finally…. We believe that attending this march together will be highly energizing and motivating for your congregational team. For your team to be best equipped to take action for the recovery of human life and healing of God’s creation, there is no better place than our Organizing in the Biocommons course.

Additional Questions: Contact office@ecofaithrecovery.org. Better yet, join us on September 11th for Grounding for Action, and have your questions answered in person!

For those of you who still want more: If you would like to help participate in the grass roots coalition of many individuals and organizations who are coming together to organize this march, feel free to sign up for a workgroup or switch your workgroup at this link. To join the Listserve through which this event is being organized, sign up here.