The Akan peoples of West Africa have proverbial wisdom associated with an image of the sankofa bird, flying forward, with the egg of the future in its beak: “It is not wrong to go back for that which you have forgotten. “What better for communities rooted in the Christian tradition than to look to the stories of the beginning for how to live wisely in the world! The creation story of Genesis chapter 1 offers just such a invocation to live according to the wisdom woven into the warp and weft of the world.

Divine creative activity does not start with nothing; rather, it starts with tohu wawohu, often rendered as “formless and void,” but better translated “unproductive and uninhabited.” The Hebrew word tohu is often used to describe desert environs, inhospitable to humans and barren. The text thus moves from a barren space to a fecund garden jostling with life!

John Walton reflects upon the story that “Creation thus constituted bringing order to the cosmos from an originally nonfunctional condition.”

If humans are made in the image of God, the creation story serves as a template for our behavior in the cosmos. The point of the poem is that human creative activity likewise should be marked by making the world more productive, and more hospitable to life not less, as is too often the case. 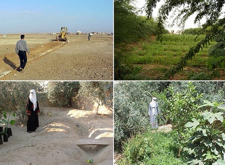 Permaculture has shown itself to be able to do this these pictures show how Geoff and Nadia Lawton have demonstrated that applying permaculture principles and practices can literally “green the desert,” taking the tohu wawohu of the Jordan desert and turning it into a lush landscape!

Biblical scholar Ellen Davis makes this reflection on the connection between the text of Genesis 1 and right living: As a liturgical poem, Genesis 1 is giving form to a certain way of seeing the world, and accurate perception provides an entry to active participation in the order of creation.

Scholars have long observed that the creation poem has a pattern to it. As you can see from this table, Days 1-3 establish niches which God then fills in Days 4-6.

I want to spend the next few minutes making some observations about the days of creation, and then some general comments about how this pattern of niche construction/niche filling relates to permaculture.

Day 1, the establishing of spheres of light and dark, are setting the basis for time. This is why following the creation of these spheres the poet describes the evening and morning of the first day. In our age, everything seems to be faster. We design our living areas to quickly move water off the land instead of letting it slow, sink and spread to recharge our thirsty soils and aquifers. Information travels at the speed of light, and there is such volume of information that no one could possibly retain it all. Day 1 reminds us that there are cycles and seasons to the earth and to our lives, and we should consider how our actions impact future generations. In the permaculture method of forest gardening, we have to plan at least 50 years in advance.

Bill Mollison says: “when we design, we are always planning for future floods, future fires, future droughts, and planting a tree a few inches tall that will be a future forest giant that will throw future shadows. Future populations will need future soils and future forest resources, shelter, and security. So somebody needs to reengineer ahead of time scout out the next century. We are not daydreaming, we are time scouts.”

Day 2 follows suit in separating the boundaries of the sea and sky, that is, it establishes the spatial sphere of human activity between sky and water. Not only does this set up a livable space for humans, but it also lays the foundation for weather.

It is important to notice that on Day 3 the earth partners with God in creation. After the formation of land and sea, God calls the earth to produce vegetation. This is an affirmation of the abundance of nature, which produces plenty of its own accord. This natural abundance of the earth contradicts the curse of Adam later in Genesis which relates food production as difficult work for humankind.

In Genesis 1, the earth does all the work; all that humankind and animals must do is reap the fruitfulness of the land. Aldo Leopold’s reflection on the energy cycle of nature is appropriate here. He describes the land as a fountain of energy flowing through a circulation of soils, plants, and animals. Food chains are the living channels that conduct energy upwards; death and decay return it to the soil. Permaculturists are caretakers of this energy cycle, designing systems in such a way that energy is kept in the system as much as possible, and diversifying the uptake and cycling of that energy through many living organisms.

In contrast, current industrial agriculture practices destroy energy cycles, allowing soil, the foundation of the energy cycle, to wash away, and replacing the energy loss with synthetic fertilizers, which again, are not kept in the system but wash away.

The refrain of this extended poem, God saw that it was good, is not so much an assessment of moral quality as much as it is an observation of the functionality of the various parts of the system. This system follows a pattern of large niche construction subsequently filled: light/dark, weather, landform, water, vegetation, followed by birds, fish, and animals.

This pattern is similar to the nested scale of permanence used in permaculture design work. The basic idea here is that you start with the greatest scale of energy and work in a nested format.

A second reflection on the refrain, God saw that it was good, is that in it lies a template for our own interaction in the world; after investing in a system, God observed its functionality. This observation is one of the first principles of permaculture: observe and interact. The recent philosophy of deep ecology informs this principle, for as part and parcel of nature, humans do not just study its process, but influence and live within it. An analogy to describe this is the difference between watching animals on a television show and watching animals in nature: in reality, there is no screen mediating our experience of the world, no matter how objective we wish to be, our experience of the natural world is influenced by the very way we live and perceive the world. We cannot help but change our surroundings; our responsibility is to do so in a way that contributes to the life, diversity, and fecundity of the planet.