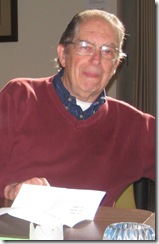 Yesterday was my 78th birthday. Four weeks from now, Carole, my partner of 55 years, will be eighty-one. And three weeks after that, our grandson Vaughn will be four.

With all these birthdays in mind, I got to musing around in a liminal zone, and tumbled onto an interesting stage:

Imagine yourself, mic in hand, in front of, say, a family reunion; or before (in trepidation) your congregation, the people of your work place, school or neighborhood, or all the people who will hear and see Pope Francis speak tomorrow in the Philippines; or even better, before all the humans who are currently breathing

With the mic up close, you find yourself asking the assembly, “If you’ve had a birthday in the last year, give us a big YES!

That first YES, and maybe even the second or third, is likely to be a bit timid, given all the around us these days. But if you’re a good coach, it grows stronger (a bit like laughter that begins in a subway car, gets picked up on YouTube, and goes around the world.)

Before you know it, these YESes engage expanding clusters of curious humans, on every continent. In turn, their YESing ignites, first the crickets, then the dogs and goats, a blue whale picks it up, then a bumblebee bat, a Siberian tiger, the loggerhead sea turtles and Komoda dragons, a redwood tree in the John Muir Woodss all the animals are YESing, all the plants respond to the redwood. Then here come the fungi, starting with the “humungous fungus in Mastodon Township Wisconsin, spreading the YES virus as fast as sound can travel, slime molds take it up, and finally all the little one-cell folks, some with and some without nuclei, all YESing in their uniqueness, all of life, all 7.8 million species we know and many we don’t, all living organisms YESing all over the place.

And lighting up the molten and solid rocks of Earth itself, all the gases (Greenhouses included), liquids and plasmas, all YESing in their own way, according to their own cyclesÃ¢â‚¬â„¢ timeframes (Sister Basalt, when did you last have a birthday? Oh, two centuries ago. It was a blast!)

All this YESing and YESing gets picked up by our Sun, who trembles slightly as he signals the news through Hubble to Milky Way and big Virgo: “Something’s up, at last they’re getting it. Planet Earth is rocking! Big Virgo sends back, “Hey, Hubble, how ya doin’ Houston, finally waking up, responds for Hubble: “Good to see ya cookin’, Virge!

As super groups of galaxies begin to smile, YESing moves with the speed of the other gravity, expanding with the whole of creation, Universe, where of course the deep four forces and the tiny ones, the elementary particles, that gave birth to the atoms, they’re all in the atoms now YESing as they form new clouds giving new birth, new birthdays to new stars, across 100 billion galaxies, including Milky Way, and back through the whole shebang, back into each event in existence this moment, breathing or not, conscious or not, pulsing in its own way, YESing because each is participating throughout this momentous, stupendous, evolving creative process, each particle and the whole, shimmering with YES, declaiming, dancing, glowing, humming, opening, gathering, recycling, trusting that YES outweighs, even if by the tiniest thread, the NOs.

See what you started when you picked up that mic?

But there are NOs. ItÃ¢â‚¬â„¢s a mixed bag. Even Rex Tillerson and Jamie Dimon have birthdays, along with their peers in Frankfort, London, Singapore, Shanghai, Amsterdam, Houston, Calgary, the rest of Wall Street, and Bern. So they’ve been given YES as well. But it seems they’re confused, big-time, about what they were given. Could it be that they are deeply afraid of YES? That they know that, over the past four hundred years, they and their peers have constructed an apparatus and sales-pitch based on refusing YES, insisting on controlling and selling YES off in little pieces, to prop up their property and puff up their self-images?

Could it be that they panic, over knowing very well that YES cannot and will not submit to their scheme forever? And to cover their panic, they manic and deny? Could it be that Rex and Jamie and at least a few of their pals know, at their core, that their golden threads, rags and digs float on our derivative bets over whether this or that hamster will fall off his frenetic wheel?Ã‚Â  Could it be that they know, underneath all the pretense of mastery, that our bets are buying tickets on trains bound for the golden holocaust of the Sixth Extermination?

And then there are the rest of us some slightly less confused, some in a growing number of people groping into maturity, possibly into considerably less confusion. We’re in different phases of recovery, struggling to wade out of the tar pit that Rex and Jamie and friends convinced us was a never-ending bonanza. Almost all of us bought in big-time, but it turned out to be a debt-based, seriously-bad investment, a loser for all but the top-enders, chewing up and and poisoning both society and nature.

Now, as we seek a maturing way, we are out here asking, what does a birthing-day mean? We are finding that celebrating birth-day points us to our birthright. We are born (and die) into YES, into creation, in which we are fully immersed, participating, struggling however, in this political economy and culture, to say yes to YES and no to NO, which means we are called to nurture a creation-supporting political economy and culture.

Birthright is our taproot, into the great tree of life, into our right relation with YES. Every birth-day throughout Earth and the Universe is a doorway into birthright, which gives us a way into experiencing what we might call creation-right: we are not separated from nature, not destined to control and exponentially commodify Earth’s systems. We are designed to flourish if we enter and maintain a relationship of respect and wonder for creation in our economy, culture and politics.

We are learning, perhaps through daily rituals, to “see creation with the eyes of our hearts,with the right as well as left sides of our brains, to smell, touch and hear every organism and being with our entire ignited, en-souled body.

This began as a “way-out-there meditation. It ends, in my view, as “way-in-here daily exercises. It;s not just about picking up the mic. More deeply, it’s the question you bring.

To sign up to receive these blog post directly to your email account,Ã‚Â click hereÃ‚Â or on the link inÃ‚Â the upper right sidebar of any page atÃ‚Â ecofaithrecovery.org.