Note* -This Call to Action letter from Scott  Shurtleff was sent out before the  Portland Youth Climate Strike last month. Unfortunately I wasn’t able to post it immediately. It’s such a strong letter I wanted to share it after the fact.

Faith Climate Action Week 2022 was surprisingly intense for me. That experience (below) calls me to show up at the Portland Youth Climate Strike on Friday, May 20th. Will you join me in standing alongside Portland’s youth climate leaders? You’ll find me at the EcoFaith Recovery banner.

The strike starts at 11am at City Hall, then march to Revolution Hall starting at noon. A Climate Festival immediately follows from 2pm to 8pm at Revolution Hall if you can’t make it to the strike. You’ll have the opportunity to meet our many local climate organizations and find opportunities to get involved at the festival (details below). 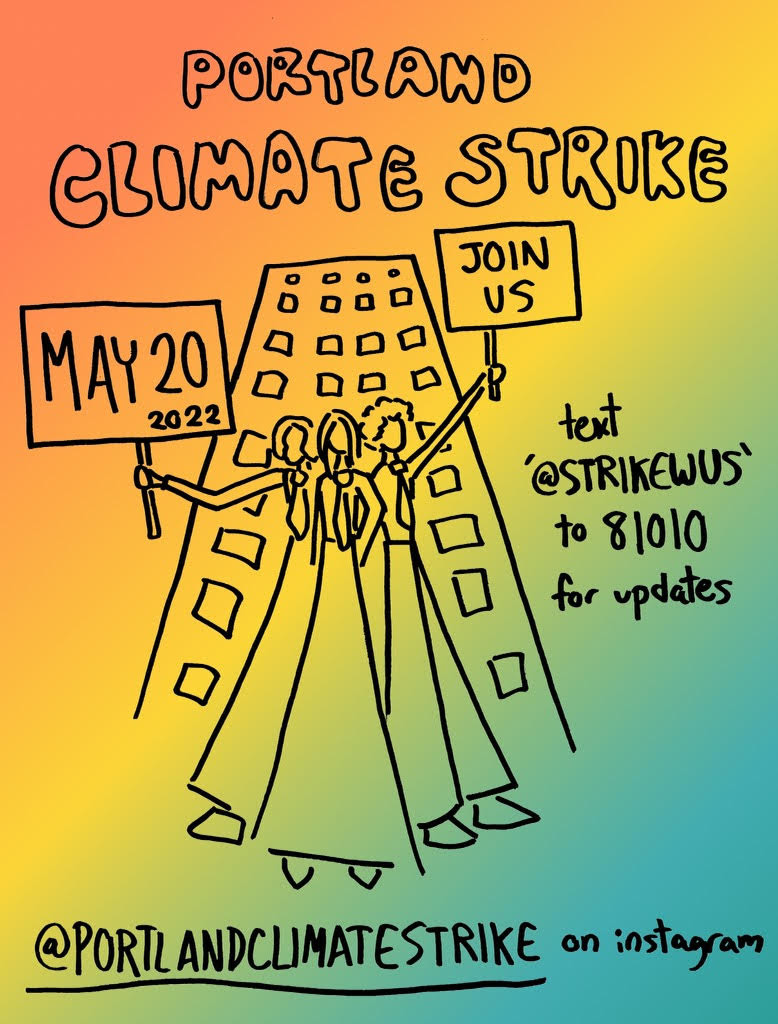 So about my experience. My faith community, Waverly UCC, participated in Interfaith Power and Light’s Sacred Trust program during the week. We gathered on Wednesday evening for “Pizza and a Movie” to watch Youth v. Gov, which tells the story of the 21 youth who filed suit claiming that the US government’s inaction on climate change is a violation of their constitutional rights. (If you missed it, you can still watch the movie on Netflix.)

We gathered in the sanctuary where I had set up to stream the movie. We all made ourselves comfortable on pillows and chairs.The pizza delivery arrived, everybody grabbed some slices, and we settled into the film.

My level of comfort steadily diminished as the evening went along and it wasn’t because I had underestimated kids’ appetite for pizza. The movie went through the timeline of inaction from the 1970s up to the current day. Scene after scene of presidents, including Obama, talking about climate action in one moment then celebrating the opening of new fossil fuel infrastructure the next moment.

All words. No action. Where was I during all of those years? That time period was my watch. I felt like hiding under a table so that the youth in the room couldn’t see me.

That place of shame isn’t a good place for me. As I work to move past it, I know that I need to take action. One action I’ll take is to show up at the Youth Climate Strike on Friday, May 20th.

Today’s storyteller at the every Thursday metro-Portland cohort meeting, Alison Wiley, reminded me to decenter myself. I decenter myself by following the lead of these youth, whose experience of climate change is more intense and more embodied than mine.

Proverbs 1 verses 20 to 21 say that “wisdom cries out in the street; in the squares she raises her voice. At the busiest corner she cries out; at the entrance of the city gates she speaks.”

I listen for the wisdom in our youths’ voices calling us to bold and immediate action. These youth seek to lead the change we need. I will be standing right alongside them. Will you join me on Friday, May 20th?

Why I’ll be at the Portland Youth Climate Strike on Friday, May 20th
Tagged on: climate change    Take action