Angie Hummel is a Minnesota Lutheran, a graduate of a fine Lutheran institution of higher learning, and a former member of the Lutheran Volunteer Corps but couldn’t tell you one thing mentioned in Luther’s small catechism (other than “What does this mean?” oder auf Deutsch, “Was meint (kein/no s) denn das?”). She loves all things ecologically-, spiritually-, and recovery-based. Oh yeah, and she also loves ice cream! And if you’re wondering whether she really knows German, the answer is sort of. After spending many hours and money attempting to master the German language in order to live in Germany (and, yes, all this really happened), she realized two things: 1) her deep appreciation for the German’s insistence on eating doughy, delicious pretzels while guzzling a liter of (only) German beer; and 2) her quite biased preference for English as a language.

Cheryl Lohrmann-Riggs is a member of the Leaven/Salt and Light Lutheran community in Portland, Oregon. A parent of Leo, she is part-time director for Create Plenty, an organization that is developing environmental leadership opportunities for studentsin high school, with a focus on Portland Public Schools. Cheryl has a history of organizing artists to create art of single-use plastic “trash” to raise awareness about plastic pollution and has in her possession hundreds of 12 x 12 inch squares of said artwork, also known as the Plastic Quilt Project. She has also initiated budding grassroots initiatives in developing a neighborhood-based economy (Inconvenience Store 2.0), a soap cooperative called Critical Bath, LLC, and a parenting cooperative (SWAP-Swap and Work And Play) to get all the work time she needs. Email: cheryl@createplenty.org.

Rev. Dr. Daniel Brunner (treasurer) is an ELCA pastor and professor of Christian History and Formation and Director of Christian Earthkeeping at George Fox Evangelical Seminary. In 2010, he founded the Christian
Earthkeeping program at George Fox, a 12-credit regimen of four courses taken over a two-year period. With some of his former students, Dan has been developing each of the courses which comprise the program: Theology and Stewardship of Creation; Theology and Ethic of the Land; Eschatology, New Creation and Communal Ethics; Poverty and Restorative Earthkeeping. Dan is co-author (with Jennifer L. Butler and .J. Swoboda) of Introducing Evangelical Ecotheology: Foundations in Scripture, Theology, History, and Praxis.

Rev. Robyn Hartwig serves as part-time pastor/organizer for EcoFaith Recovery and part-time associate pastor for St. Andrew Lutheran Church of Beaverton. She is passionate about starting small groups that deepen community and foster spiritual recovery from consumerism’s addictive and devastating effects upon our lives and the life of our Earth home. Her leadership of EcoFaith Recovery has been greatly enhanced by her training as a GreenFaith Fellow in 2009 2010, her participation in the 2008 training of 150 religious community leaders by former vice-president Al Gore’s Climate Project, and her previous training and experience as a high school economics and government teacher. She was recently trained by Lutherans Restoring Creation to serve as a “Green Congregations” trainer and by the Industrial Areas Foundation in its week-long Northwest Regional Leadership Institute to enhance her abilities as a faith-based organizer. In her free time Robyn reconnects with the natural world through hiking, drumming and growing edible sprouts in her kitchen. 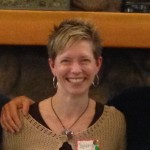 Rev. Solveig Nilsen-Goodin is the pastor of The Wilderness Way Community, a small emerging faith community, which seeks to ground and cultivate “wild” Christian disciples and fearless spiritual leaders to participate in the Great Work of our time – the transition from industrial growth society to life-sustaining civilization. Solveig grew up in a small town in Minnesota, and a small city in Iowa, but the wilderness–both biblical and natural–has been calling to her for most of her adult life. She received her M.Div. from Harvard Divinity School, where her Master’s thesis was entitled, “A Community Thriving in the Wilderness: A New Metaphor for a Whole Church.” Following her year of internship at Redeemer Lutheran, she received her first call to King of Kings Lutheran Church in Milwaukie, OR, where she instituted an ecological liturgical season during the month of October.

Solveig co-leads EcoFaith Recovery’s “Grounding for Action” meetings and the “Organizing in the Biocommons” course. She is a spiritual director, published author and accomplished musician, in addition to raising two miraculous boys (Soren, 8, and Stig, 5) with her husband Peter. She built a yurt in her back yard and continues to dream of the day when all Christian communities will worship in yurts.

Rev. Terry Allen Moe was pastor of Redeemer Lutheran, NE Portland since 1981. His training in Spiritual Direction and his passion for community organizing based in Industrial Areas Foundation has led to twenty years of pursuing connections between prayer and justice. He completed a Doctor of Ministry program at Weslely Theological Seminary in Washington, DC called, “Spirituality and the Suffering of God” which further helped this integration. Five years ago while co-leading a class on Thomas Merton and Thich Nhat Hanh with a Buddhist co-teacher, he began to contemplate the concept of “engaged spirituality” which both of these monks expressed in response to the Vietnam War. He now sees the threat of global climate change as a spiritual issue which must be addressed through an engaged spirituality which has at its base prayer and justice. He continues to pastor at Redeemer Lutheran, to act as mentor/leader with an emerging faith community, LeavenProject, to lead community action through Metropolitan Alliance for Common Good (MACG, IAF affiliated broad based organization in Portland, OR) and to teach new interfaith courses directed at our ecological crisis. He is excited to offer his gifts in EcoFaith Recovery and to learn and grow in the vital community arising among its leadership.

Dick Harmon is a member of the Redeemer-Leaven Project community in Portland. He is two years into retirement, from 45 years of organizing, mostly with the Industrial Areas Foundation. His entire family in a number of aspects of creation-centered work. He is currently at work on two books about the relationship of our economic and ecological systems, and how that relationship might be changed at local and regional levels. He teaches a class ” Organizing in the Biocommons”  for the Leaven project. Dick’s primary interest on this question is how it can help transform civil sector mediating institutions, which include congregations; especially how it can re-connect Boomers and post-Boomer generations and move from a dysfunctional congregational culture, of strangers and “program,” to a new organizational culture, of relational power. 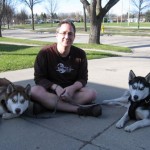 Rev. David Eppelsheimer, a native Oregonian, serves as the pastor of Community of ChristChurch, an ELCA congregation in Hillsboro (right next to the DEQ!) Before returning to Oregon in August of 2011, he served two congregations in North Dakota over a span of nine years. David’s entry point into EcoFaith Recovery was through his participation in the Organizing in the Biocommons course where he became keenly aware that he still has much to learn. He is blessed to have been married to his partner, Rhonda, for 29 years and to be the father of two amazing young women, Kirsten (in Minneapolis) and Jasmine (here in Portland). He enjoys playing the guitar, watching movies and bicycling with his Siberian Husky Lily.